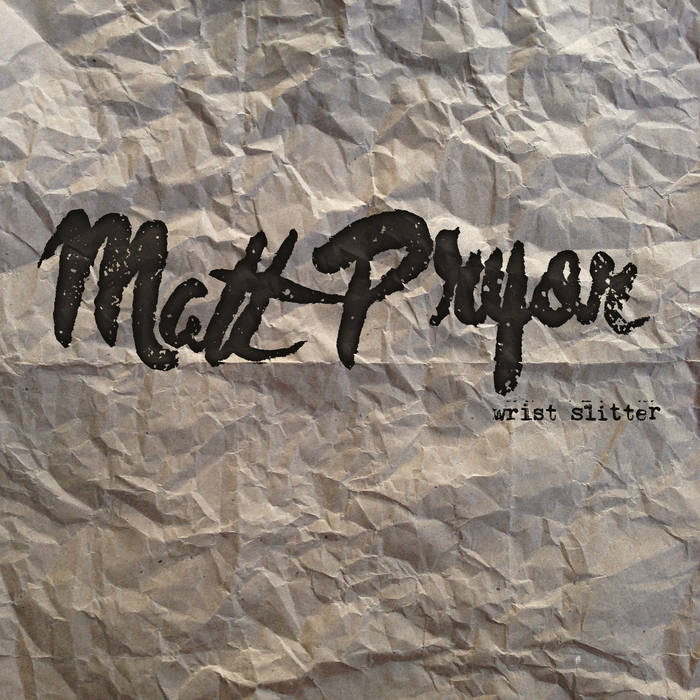 In March of 2012, singer and guitarist Matt Pryor decided to give up music for good.

After seventeen years of writing, recording, and touring with a handful of bands—including emo ambassadors the Get Up Kids and folk-tinged indie troubadours the New Amsterdams—Pryor was exhausted, so he decided that it was time to refocus on his family. “My daughter’s eleven,” he says, “and I realized that I had been touring longer with kids than without. It was just one of those things that made me wonder, ‘What am I doing with my life?’

“That and, to be completely honest, if I’m never in a backstage dressing room with dicks drawn all over the wall again, that’s fine. There’s no part of my psyche that misses that.”

Having just returned from a three-year Get Up Kids reunion, Pryor also found himself lugging around the kinds of questions that rouse doubt in even the most confident artists. On these tours, Pryor performed songs showcasing the band’s fifteen-year catalog, including ones from their 1999 full-length Something to Write Home About. “It’s our most popular record,” he explains, “so of course we’re going to play songs off of it. But you kind of wear yourself down mentally. You ask yourself, ‘So, did I peak then? Is everything else just a side note?’ And that’s depressing. I love playing those songs—I’m proud of the work that we’ve done—but, after a while, you get into your own head.”

So Pryor took some time to search for himself. First, he spent a few months working on a friend’s organic farm. “Being a farmer’s hard fucking work,” he laughs. “But it was really satisfying and really rewarding to do. It opened my eyes up a lot.” As he tugged at weeds, hand-harvested radishes, and sweated through one of the worst droughts in the Midwest’s history, he found himself listening to podcasts rather than records, which inspired him to start his own. Launched in November of 2012, Nothing to Write Home About features Pryor’s conversations with the musicians he has met over the years. Though he’s thankful for the experience, especially since it stoked his passion for podcasting, he found he was still searching for himself when the harvest was over. Farming, he discovered, didn’t scratch any of his itches. “Working for other people obviously isn’t as much fun as being your own boss,” he concludes, “plus it doesn’t pay as well.”

Instead, Pryor’s “a-ha!” moment happened as he readied a resume—something he had never needed to do before. “I’ve been a touring musician since I was eighteen,” he says, “and the last job I had was in a record store. So I put together this resume, and I realized, on paper, it looked like I hadn’t had a job since 1998 when, in fact, I had been running several successful companies for the last fifteen years.” That’s when it occurred to him that maybe he was meant to make music. “It was like, ‘Oh, maybe this is what I’m supposed to do,'” he remembers. “I’ve worked my whole adult life to build this into something and, what, I’m going to piss it away and start over?”

It was good timing, then, when former Get Up Kids and My Chemical Romance keyboardist (and Reggie and the Full Effect frontman) James Dewees approached Pryor about performing together. A show here and there eventually culminated into a collaborative recording project. “He emailed me out of the blue with some demo ideas,” Pryor explains. “They were the completed instrumentals of some songs that he recorded at home. So I dropped them into a computer and wrote lyrics and a melody and sang it, and then he sang the harmonies, and then we sent it to [producer] Ed Rose and he made it sound great.”

The resulting three-song EP, co-released by Equal Vision Records and Max Bemis’s Rory Records, won’t surprise anyone already familiar with their work. Opener “I Can Be So Cold” features the ground-rumbling guitars and layered synths that made Reggie and the Full Effect famous; instead of Dewees’s warble, though, Pryor’s voice soars across the track. Inversely, “Failing You” sounds like something that might have appeared on Something To Write Home About, the Get Up Kids’ 1999 full-length. Bright and brisk, with tolling guitars, this second song finds Pryor singing from an unlikely perspective: A werewolf begging for forgiveness from his family, which is out of his control. “I wanted to write about goofy shit, but word it in such a way that no one knew it was about goofy shit,” he laughs. “I’m doing a record with James, so it has to have at least some goofy shit on it.”

The outcome this collaboration is something that sounds familiar and immediately different, something fresh but still in character, and something that Pryor found particularly cathartic. After releasing Confidence Man in 2008 and May Day in 2012—quieter, folkier solo releases that allowed him to express a separate side of his songwriting—Pryor was ready to record something more aggressive. “I’d just gone through a really negative headspace and then seen the light at the end of the tunnel,” he says. “So I was like, ‘Well, I’m just going to fucking belt this out then,’ and that was really satisfying.”

It was this sense of satisfaction that lead to Wrist Slitter, Pryor’s third solo record and one that stands apart from his others. It’s not just his more assertive singing and instrumentation—Pryor recruited drummer Bill Belzer and bassist Eric McCann of the New Amsterdams and “told them to play fast,” he says—but also in the ideas that its songs express. “My last record May Day was lyrically very dark and very unhappy, almost like a breakup record,” he explains. “The original concept of Wrist Slitter was for the chorus of the title song to say, ‘I don’t want to write another wrist-slitter.’ But it didn’t end up that way. It just ended up being this one-minute long blue-grassy, banjo thing; it is, in fact, actually a wrist-slitter.”

Despite this, Wrist Slitter as a record speaks about calling yourself out and reminds you that it could be worse. The title track speaks to this specifically—”It’s not about anyone else,” Pryor says, “and it’s not an anti-suicide anthem. It’s acknowledging the fact that I can go to a dark place sometimes, but that it’s never as bad as it seems”—as does “Kinda Go to Pieces”, the record’s first single. “It’s very honest about my faults and my own dark place,” he admits. “To be completely honest, towards the end of the touring cycle when May Day came out, I was really phoning it in because I was so unhappy, and I hate that about myself. I never want to be in that position again.”

Wrist Slitter, then, is not only about honestly confronting one’s unhappiness, but is also Pryor’s means of rediscovering and reclaiming that which brings him happiness.

It was this “dark place” that drove Pryor to turn his back on music for good. Six months later, though, he’s ready to release two new records—a turnaround he attributes to exploring a world apart from performing music. At the end, though, he found that he was where he needed to be all along. “This is who I am, and this is what I do,” he says. “I just had to go off the deep end and try other stuff in order to figure it out.”