Soon We’ll All Be Ghosts 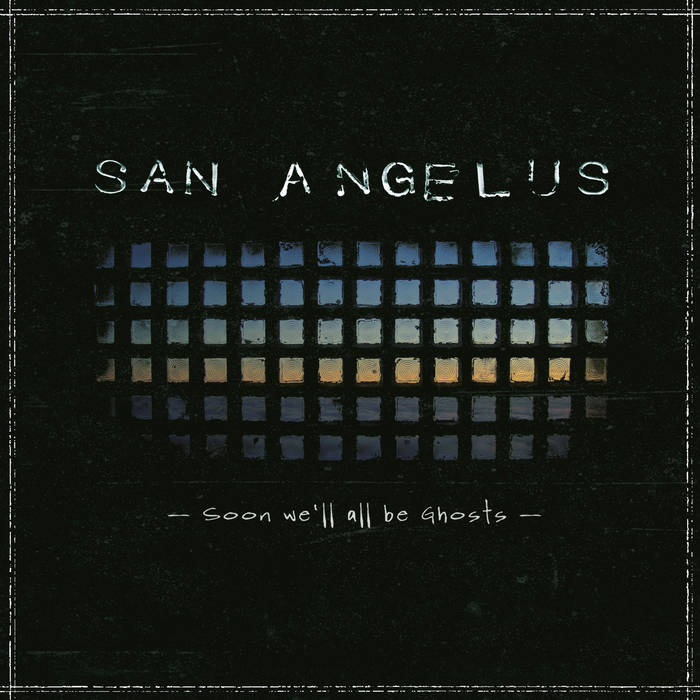 Over a period of over 2 years, ‘Soon We’ll All Be Ghosts’ was recorded, mixed and mastered in Seattle, WA with Chris Commons (These Arms Are Snakes) at RedRoom Studios (Mastodon, Isis, Minus the Bear) with vocals recorded in Vancouver at Ten and a Half Studios with Ola Klüft (Perishers, A Lanky Swede). With such a slow building trajectory, it seems ‘on track’ that this album is finally making it’s physical debut in 2014.

At times visceral, moody and yearning, this album is a journey of reflection, growth and discovery – both musically and lyrically. Reflecting the bands obvious foundations, but with a maturity and progression that doesn’t feel stale or ‘stuck in the past’ – SAN ANGELUS pulls from a myriad of influences projected through a familiar phonic landscape.

A document to their passion, the band first shared this project online with fans as a ‘pay-what-you-can’ digital download, with aims of distributing into the headphones of as many fans as possible.

The results were glowing reviews from different corners of the world and provided the financial support to release ‘Soon We’ll All Be Ghosts’ in two limited physical formats. A simple and affordable ‘Eco-Package’ and as a limited edition of 100 hand-stamped ‘Deluxe-Package’ on Amber & Wool Music (distributed through Revelation Records)

With an impressive roster of veteran musicians, the band has overcome many obstacles to document this sonic endeavor including members living in various and changing locations (Los Angeles, Vancouver, Portland). Any long-distance relationship has its share of unique celebrations and challenges – SAN ANGELUS can attest to that.

In the years since starting the project, Larry continues to drum with Pelican while Kim Kinakin works on Amber & Wool Music – Jason and Mark have since moved-on from the band making room for the latest addition to the SAN ANGELUS line-up, Jahmeel Russel (Black Halos, Red Vienna, Kittens) on bass and vocals.

With a string of videos for each song and a new dynamic 3-song release due in 2014 via The Mylene Sheath, there isn’t any lack of momentum in the bands creative drive as it moves forward in it’s ever evolving story.

It’s an exciting testament of passion and commitment as SAN ANGELUS perseveres in spite of the challenges, twists and turns – it’s sure to be equally inspiring watching them move forward, transform and grow.

The newest coup is the release of ‘Soon We’ll All Be Ghosts’ as a strictly limited vinyl version on Arctic Rodeo Recordings. Fans can expect an all-round carefree package including an LP on colored vinyl, a 4-page folded insert, a CD including all album tracks and a DVD including the video clips for all 12 album tracks plus a recording documentary and a making-of feature about the deluxe CD.